It’s a drizzly autumn day, when perfumer Cécile Zarokian visits niche perfumeries in Antwerp. That evening, she gives a talk for clients of Necessities. In between perfumery visits, I meet her for a coffee. A beautiful, elegant woman who was destined to follow in her father’s footsteps as a doctor. But luckily she discovered the art of perfumery in time.

From doctor to perfumer

“I studied medicine first, because I wanted to become a paediatrician. All my life, I have been very attentive to scents. I recognised the detergent my friend’s mothers used to wash their clothes, I adore the smell of paper, and kept the perfume samples my mother brought from the perfumery, … But I had no idea that perfume making could be a profession.

When a friend told me about the perfume school she attended, I was immediately intrigued. I took entrance exams from Isipca and passed. During my internship at Robertet in Grasse, I learnt much more than at school. After that I got a job with the company, in Paris. When there was a round of cutbacks, I lost my job, as one of the youngest perfumers.

A leap of faith

Her redundancy gave her the push she needed, to take the plunge as an independent perfumer. “That was a huge gamble that I haven’t regretted for a moment,” she says. “Being self-employed gives you enormous freedom. But it is not easy. Because you have to do everything. I don’t spend all day in the lab, because I also have to run a business: hold meetings with customers, follow up e-mails and orders, make sure I find the right ingredients for my projects, take care of my PR, follow up projects (smell how the fragrances evolve and make adjustments), but also visit trade shows and events,… Every day is different. But you create mainly in your head and write out your ideas in formulas.”

Apart from keeping all those balls in the air, her biggest challenge is probably the closed nature of the sector. “Producers put a lot of money on the table purely to be allowed to submit proposals for briefings. They can also offer market studies. You can’t do that as a small independent perfumer. So I have to convince brands to trust me and give me a chance.”

However, Cécile has quite some references. When she was still working as an apprentice perfumer at Robertet, she won Amouage’s briefing for Epic Woman. That perfume is still one of Amouage’s bestsellers today. She did not contact the brand again until 10 years later, when a new ceo and creative director arrived. She connected with Renaud Salmon and he asked her to propose a vanilla fragrance. In less than a year she finished Material. “When you work for a brand with such a strong DNA as Amouage, the options are not endless,” Cécile knows. “Moreover, I am self-employed, so I have to work very efficiently. I only propose perfumes that I fully support of myself. Although my personal taste is independent of my work.”

Epic was Cécile’s first perfume. “Amouage was fairly unknown at the time. My mentor didn’t have time and handed me the briefing about the Silk Road to China and ingredients from the Spice Route. I took a risk by not going for the obvious herbs and spices, but used them more subtly. A rose was my starting point, to which I added incense to make it more mysterious. The brand loved it and gave me the project, much to my disbelief. I was even allowed to put my name on the project, even though I was still an apprentice perfumer. That perfume launched my career.”

Epic was already quite intense, with a concentration of 25%, which is very high for an eau de parfum. But Renaud Salmon wanted it even more intense and ordered an extraît de parfum version of Epic. “A higher concentration means less alcohol, so the perfume evolves less. At the same time, the extraît had to have an added value compared to Epic.” In other words, a double challenge.

“For Epic 56, I used Centifolia rose instead of Turkish rose, because it has a sweeter, richer and fruitier aroma. But it is more expensive and harder to get, as Grasse produces only small quantities, mostly reserved for Chanel and Dior. I dressed it up with spices like clove, cinnamon and pink pepper for a sparkling start. I wanted the base to be even darker and richer, so I pushed the amber and added a little oud. You can hardly smell it, I used it more for its effect.”

“The same composition smells different at various concentrations because they make certain notes stand out better.” Explains Cécile. “For Epic 56, the ideal concentration turned out to be at 56%, unusually high, even for an extraît de parfum! In addition, processes such as maturation (letting the perfume oil rest so that all the ingredients can express themselves) and maceration (dissolving the concentrate in alcohol) can also have an effect on the fragrance. Amouage opted for a five-month process, which is an absolute luxury!”

“Renaud wanted a real vanilla perfume, not a cheap cake scent. Material is not the typical gourmand, but shows vanilla in all its rich glory, with its wood and leather facets. The aroma of vanilla pods is rich, dark, spicy, heavy, leathery, even animalic. Vanilla is one of the most expensive ingredients, but that wasn’t an issue, I got the budget. So the inspiration of the perfume, Madonna’s song Material Girl, is not far fetched.”

“I wanted to make a tobacco perfume, but something different from what already exists. Most tobacco fragrances are sweet and honey-like. They don’t really smell like tobacco. The idea behind the fragrance was a fusion between Oman and Cuba. Smoke connects the 2: in Oman you have the ubiquitous incense, in Cuba the cigar leaves. That became the main accord.” Cécile complemented that with a green aromatic top accord (anise, lavender, basil), a spicy-fruity heart with clove, liquorice, cumin and dried plum and a dark leather base (guaiac and birch). “I worked on the evolution of a burning cigar, from lighting to the end. The contrast between the warmer facets of tobacco and the cold, smoky ash.”

Making an oud fragrance that is different from what is already on the market, that could appeal to both true oud connoisseurs (like the royal family of Oman, the owners of Amouage) and a wider audience, is no small challenge. “Real oud oil has a barn scent” Cécile knows. “It is a very animalic, leathery, rich, dark and heavy scent.” Moreover, it is hugely expensive, so it is usually imitated, like a smoky wood accord. Cécile chose to combine it with vanilla, to tame the animalic nature of the oud. “Besides, vanilla has something addictive, which makes you want to keep smelling it.” The oud-vanilla accord was enriched with wood (patchouli, cedar and cypriol) and a smoky-warm base (castoreum, birch, amber and guaiac).

About the signature style of Jean-Claude Ellena

A plea for perfume etiquette 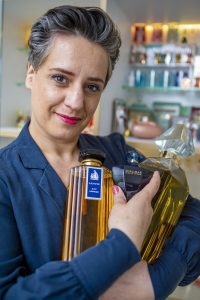